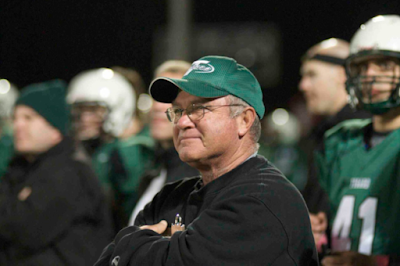 With nearly five decades dedicated to high school football and 42 years as head coach of some of Oregon’s most successful programs, Tigard High School’s Coach Craig Ruecker announced Tuesday that he is retiring.

Coach Ruecker is a two-time Oregon State Coach of the Year and presently the fourth winningest coach in the history of football in Oregon with 308 wins. He began his coaching career at Reynolds High School where, during a five-season tenure, his teams won two Wilco League Championships. After Reynolds, Coach went to the Metro League, staying at Glencoe High School for 22 years. There his teams made the playoffs 17 times, eight advancing to or beyond the quarterfinals. The 1986 and 1994 teams won the State Championship with perfect 14-0 records. In 2004, in recognition of his accomplishments, Coach was honored by the naming of Craig Ruecker Stadium at Hare Field.

Following Glencoe, Coach Ruecker took over a downtrodden Redmond High School football program, helping them to the state playoffs four of the five years with the school. While at Tigard, the program has been in the state playoffs all 10 years; with seven trips to at least the quarterfinals, five times the semifinals, and once the finals. In the 10 years at Tigard there have been five league championships and an overall record of 92-30. In addition, his mentorship over the years has led to more than 20 of his assistant coaches becoming head coaches across the State.

Ruecker first met privately with his coaching staff and athletes, then on Tuesday, he sent out messages to the Tigard High School staff and community expressing his thanks for their support of him and his team during his time as head coach.

“While the many successes on the field have been great, the greatest feeling has been one of a community united; in support of our team and all that surrounds it,” said Ruecker. “Friday nights at Tigard High in the fall are magical!  With four to seven thousand fans supporting our team, our band, our dance team, and our cheer squad, it is a great example of what a wonderful community looks like.”

“Coach Ruecker has been more than a football coach in his ten years at Tigard High School,” said Tigard High School Athletic Director, Alan Boschma. “His legacy goes beyond blocking, tackling, and winning games. His Love for the players, staff, the game of football, and school will forever change the lives of those he has been around. The Tigard community is fortunate to have a man with such high integrity and we should be grateful for the impact he has made.  He has modeled, coached, and now has left us all to ‘Be First Class’.”

Beyond being recognized for his leadership and success on the field, Coach Ruecker will equally be remembered for the high expectations he held for his athletes off the field, emphasizing good character and academic excellence. Having spent 43 years as a math teacher, Coach’s dedication to academics remained uncompromised and has resulted in his team at Tigard landing in the top 10 of Oregon’s annual Academic All-State list for 6A High School Football 10 straight years and, in 2017, they ranked number one.

“Throughout my career, I can honestly say there are few educators I have met as dedicated to his students as Coach Ruecker,” said Tigard-Tualatin School District Superintendent Susan Rieke-Smith.” He lives and teaches according to his values and has a unique gift of using the game of football as a vehicle to instill the principles and ideals he holds fast to. Coach has set a high bar not just for Tigard Football but for high school athletics as a whole. We are very grateful for all he has given to our program.”

Ruecker plans to stay in the Tigard community with his wife of 48 years, Beverly, and promises to continue to follow Tiger football, cheering from the stands.
Posted by Tigard Football at 8:24 AM 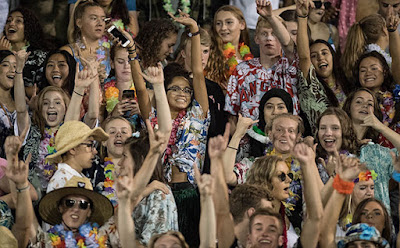 Plus seating, Signage and other promotions available.